Achieve higher levels of economic productivity through diversification, technological upgrading and innovation, including through a focus on high-value added and labour-intensive sectors

According to European Commission’s European Innovation Scoreboard 2018, Europe is still under-performing in innovation compared to its international competitors. Innovation is, however, recognized as crucial element of Europe’s global competitiveness. According to the report published in June 2018, “the EU is catching up with key competitors such as Canada, Japan and the United States. But closing this innovation gap and maintaining the lead over China will require a concerted effort to deepen Europe’s innovation potential. Sweden is the EU innovation leader, followed by Denmark, Finland, the Netherlands, the United Kingdom, and Luxembourg which joins the top innovators group this year. Germany drops to the group of strong innovators.”

According to the EC, innovation has been the key component driving Europe’s economic growth in the past several decades. The report includes background data that show that Europe takes about 20% of global R&D investment, a third of all high-quality scientific publications, and world leading position in industrial sectors such as pharmaceuticals, chemicals, mechanical engineering and fashion. Europe is also strong in supporting innovation through Key Enabling Technologies, such as photonics and biotechnology.

On the other hand, Europe invests less in innovation than the competitors do, while companies tend to invest more in systems that give them more opportunities for growth than Europe does. R&D intensity is still uneven among EU regions, with investment and research heavily concentrated in Western Europe. Additionally, 40% of the workforce in Europe lacks the necessary digital skills.

What is the contribution of Austria and Croatia in the constellation of efforts? 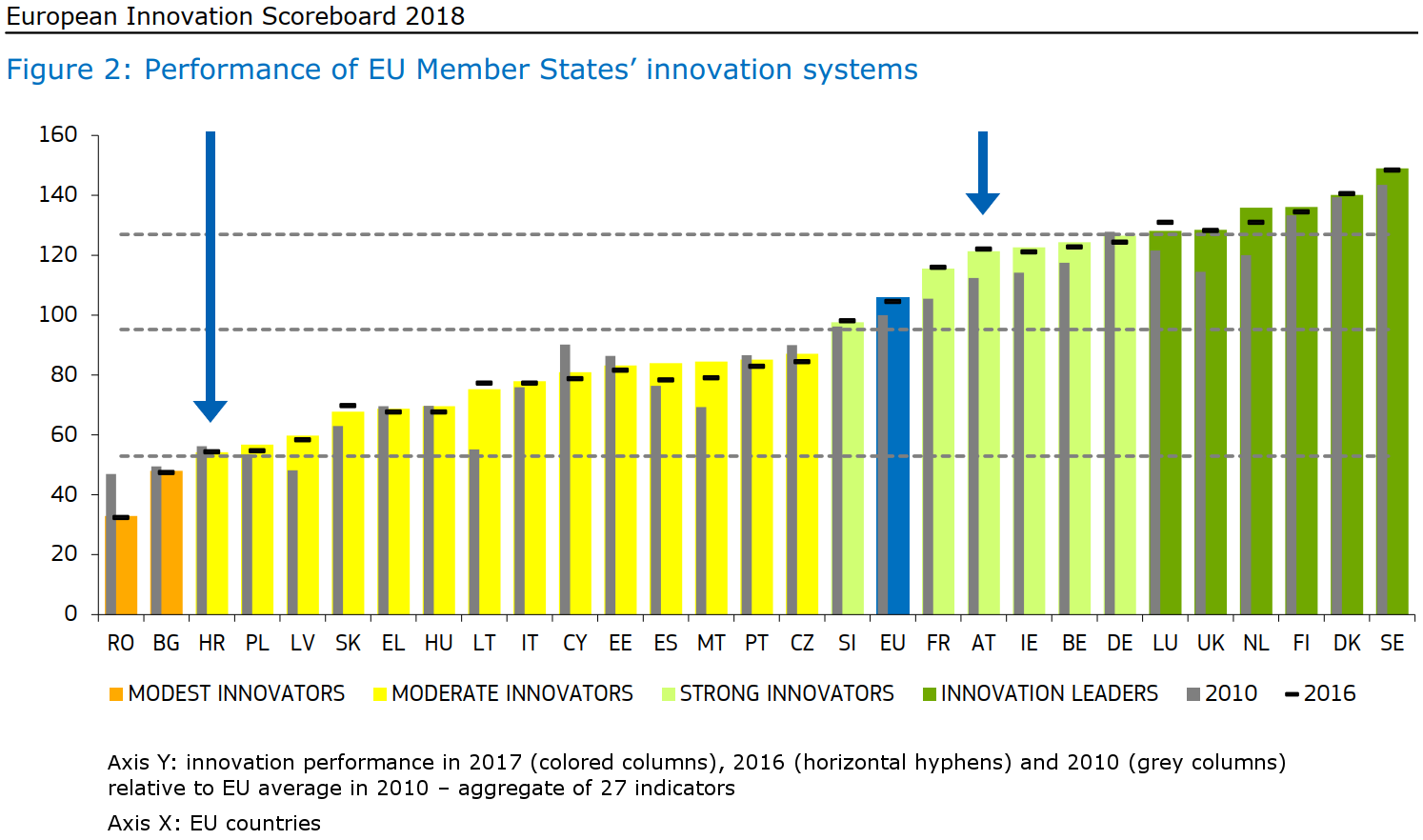 Austria is in the category of “strong innovators”, with result above EU average and increasing performance in comparison to 2010, taken as the base year. The strongest dimensions of innovation in Austria pertain to intellectual assets and linkages, while few areas that record decline in performance are employment and sales impacts.

Croatia belongs to a group of “moderate innovators” and lagging behind most EU countries (better only compared to Romania and Bulgaria). EC data also shows that its performance has declined relative to the EU in 2010. For Croatia, the biggest progress has been made in terms of non-R&D innovation expenditures, showing firm investments and innovators as the strongest innovation dimensions. The weakest elements pertain to intellectual assets and sales impacts. 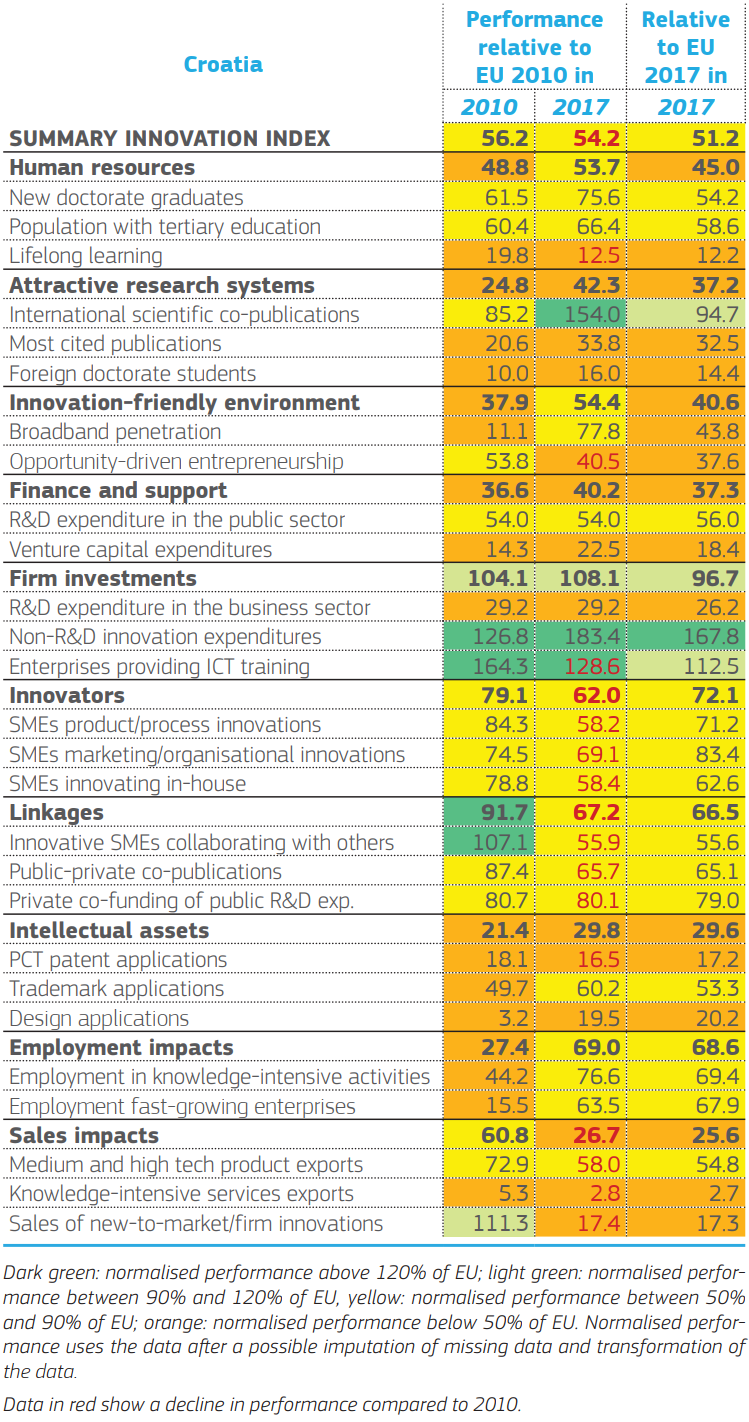 In The Global Competitiveness Report 2018, World Economic Forum provides information on the strength of relations between competitiveness and innovation as one of the four key factors defining competitive edge for 21st century economies (along with human capital, resilience and agility).

Their findings show that many, or even most countries in the world struggle with innovation and employing it to become growth generator. According to their results, there are only a few innovation powerhouses in the world, including Germany, the United States and Switzerland. Additionally, the global median score on the Innovation capability pillar is 36, and for 77 of the 140 economies studied, Innovation capability is the weakest pillar.

Innovation capabilities for Austria show growth in nearly all segments except for international co-inventions, and an above average score of 69.8. Scientific publications are best graded element (99.2), followed by trademark applications (89.2) and diversity of workforce (76.6).

Croatia‘s innovation capabilities are at 37.7, just above the world median. They are performing best in trademark applications (79.3), followed by scientific publications (80.3) and diversity of workforce, which leads the rest of the below average capabilities (38.9).

How do we contribute?

Within the three categories of service companies – expertise, experience and efficiency – we focus on the area of expertise: our key priorities are quality leadership and development of new solutions for our clients.

Find out more on following pages:

This site uses cookies. By continuing to browse the site, you are agreeing to the use.

We may request cookies to be set on your device. We use cookies to let us know when you visit our websites, how you interact with us, to enrich your user experience, and to customize your relationship with our website.

Click on the different category headings to find out more. You can also change some of your preferences. Note that blocking some types of cookies may impact your experience on our websites and the services we are able to offer.

These cookies are strictly necessary to provide you with services available through our website and to use some of its features.

Because these cookies are strictly necessary to deliver the website, refuseing them will have impact how our site functions. You always can block or delete cookies by changing your browser settings and force blocking all cookies on this website. But this will always prompt you to accept/refuse cookies when revisiting our site.

We fully respect if you want to refuse cookies but to avoid asking you again and again kindly allow us to store a cookie for that. You are free to opt out any time or opt in for other cookies to get a better experience. If you refuse cookies we will remove all set cookies in our domain.

We provide you with a list of stored cookies on your computer in our domain so you can check what we stored. Due to security reasons we are not able to show or modify cookies from other domains. You can check these in your browser security settings.

We also use different external services like Google Webfonts, Google Maps, and external Video providers. Since these providers may collect personal data like your IP address we allow you to block them here. Please be aware that this might heavily reduce the functionality and appearance of our site. Changes will take effect once you reload the page.